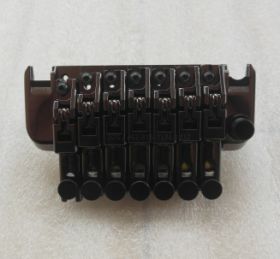 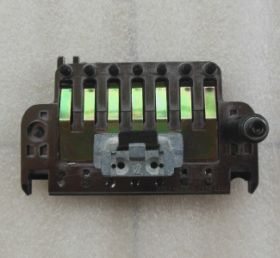 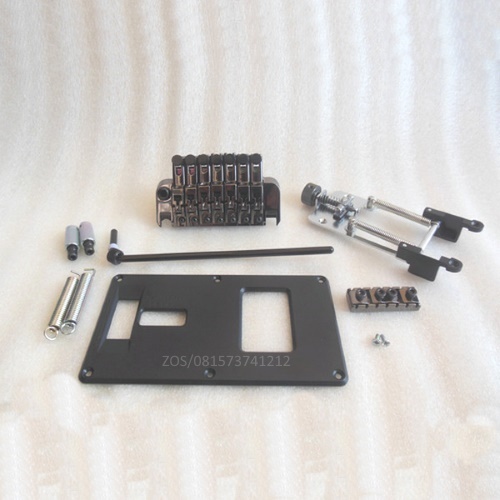 The Edge Zero II is a double locking tremolo system developed for Ibanez and offered on a number of Ibanez guitar models. It was revealed in December 2010 and introduced on guitars available in 2011. It is produced in China.

The Edge Zero II consists of a base plate cast of a zinc-based alloy (likely Zamak) with individual saddles and fine tuners. This body is attached to a dense cast metal block connected to a set of three springs which balance the tension of the guitar strings and allow the tremolo to float in a cavity routed into the guitar body.

Like all double locking tremolos, the Edge Zero II is designed to be use with a locking nut which anchors the strings at the headstock. Fine tuners attached to each saddle allow the player to adjust tuning once the nut is locked down. The saddles can be moved fore and aft to set intonation of each string. The entire bridge can be adjusted up and down in the cavity to adjust the string action by raising or lowering the studs. There is no allowance for adjusting the height of individual strings. Instead the base plate is built in a way so that the saddle heights match the radius of the fretboard.

The Edge Zero II shares the locking stud posts of the Edge Zero. The posts feature an internal grub screw which can be locked down against the bottom of the stud insert. This design provides an additional measure of tuning stability by increasing the stability of the studs.

There are no reviews yet.

If the product you receive is not as described or low quality, the seller promises that you may return it before order completion (when you click ‘Confirm Order Received’ or exceed confirmation timeframe) and receive a full refund. The return shipping fee will be paid by you. Or, you can choose to keep the product and agree the refund amount directly with the seller.

f you do not receive your purchase within 60 days, you can ask for a full refund before order completion (when you click ‘Confirm Order Received’ or exceed confirmation timeframe).

Rp30.000.00
MP 0273 -  Pickholder Alice Rubber A010C
Add to cart
Quick View
Need Help? Chat with us
Start a Conversation
Hi! Click one of our member below to chat on Whatsapp
The team typically replies in a few minutes.
Zeb Admin
Whatsapp Chat